It´s January 20th, “Tag der offenen Tür”. The chemistry room of the school is fi lled with excited children. There are long queues in front of the desks. But what is the source of this excitement? Why is chemistry the most interesting subject this day? It´s Slime!

You don´t know what slime is? Continue reading and fi nd out more about one of the most entertaining and amusing experiments. Slime is a toy, which entered the market in 1976. It was produced by a big American company and is a viscous product, which can be dyed with food colorings. But when it first entered the market its color was bilious green.

The first steps for the invention started in the 1920´s when Hermann Staudinger, who also got the Nobel Prize for his discoveries in macromolecular chemistry, began to work on polymer science (polymers are molecules consisting of many small molecules). At fi rst people thought that polymers consisted of cyclic compounds, but Staudinger believed that they were made of chain-like molecules. In 1928 the scientists Kurt Heinrich Meyer and Hermann Franz Mark promoted his idea and in the 1930´s Staudinger´s hypothesis was widely accepted.

During the 1980s, various slime types entered the market. They consisted of polyvinyl alcohol, guar gums, or even fortified milk. Polyvinyl alcohol is produced industrially and harmless. The price is about 3.78 to 9.18 Euro per kg. Guar flour is also called guaran and is a polysaccharide extracted from the guar bean. The price is between 3.92 and 5.58 Euro per kg. Guar fl our is used as stabilizer, thickening agent for food and cosmetics and bonding agent in hair gel and shower gel.

At school we wanted to check, how the properties of slime differ, when the amounts of the various ingredients and the temperatures are changed. That´s what slimes made either from polyvinyl alcohol or guaran normally look like: Figure 1 shows polyvinyl alcohol slime. It bounces when thrown onto the desk, and the components are well-linked. It is elastic and glibbery, but it is still possible to form a ball. When leaving the ball on the desk for some time it spreads out. After heating (Fig. 2) the slime to 40°C it did not change at all. But after freezing white stains appeared and it was possible to tear the slime (Fig. 3).When the slime gets warmer again, the stains disappear and the whole lump looks as before. 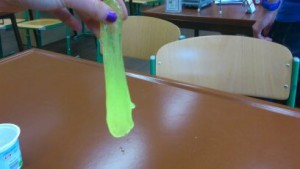 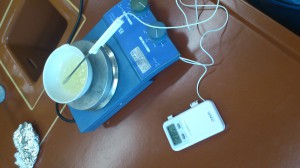 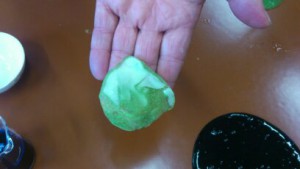 Guar slime behaves a bit differently: If you pull the material slowly, it stretches and if you do it really carefully you can form a thin film. The slime doesn´t bounce when thrown onto the desk. If you tilt the container, where the slime is in, a bit upward, it will fall out and if you hit the slime with something, there will be no splashing.

The heated guar slime was stickier, while the one that was put in the refrigerator became smaller and darker. However, the properties did not change: The slime could still be stretched to a thin film (Figs. 4, 5). Then we tried making two other slimes, one with 50 % less PVOH and one with 50 % less guar flour: The PVOH slime deliquesced when pouring it onto the desk (Fig. 6). It was sticky and it was not possible to arrange it into a form because it behaved like liquid. When we tried to make slime with half the usual amount of guar flour the product started to fall apart after some time (Fig. 7). We also tried using 50 % less Borax with both slime types: This also didn’t work well, as can be seen in figure 8 because the materials didn’t link well. It was too little borax. Only half of the used substances formed the usual slime. The other half remained liquid. After leaving the two slimes uncovered for a week they had changed a lot: The PVOH slime was dry, hard and transparent and the guar slime was almost liquid and similar to hair gel. 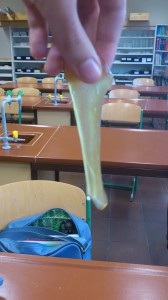 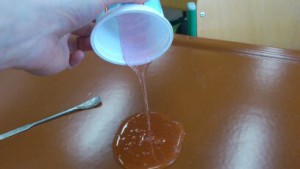 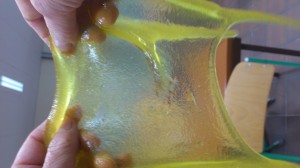 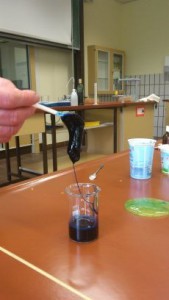 HOW DOES IT WORK?

When slime is produced, linear polymer molecules become cross-linked. The important thing is the borax, which is a bonding agent. It consists of sodium borate (Na2B4O7*10H2O) which dissolves in water to form B(OH)3, also known as boric acid-borate. This boric acid-borate accepts OH– from the water molecules, which is called hydrolyzation (Fig. 9). Depending on the pH, the equilibrium is shifted to the left or right side. The borax reacts with the polyvinyl alcohol and the result is a three-dimensional structure (see Fig. 10). 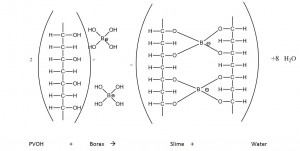 Fig. 10: Reaction of PVOH with borax to produce slime and water

NOTE: WHEN DEALING WITH CHEMICALS YOU MUST OBSERVE UTMOST CAUTION TO NOT HARM YOURSELF, OTHERS, OR THE ENVIRONMENT. TAKE CARE THAT LITTLE CHILDREN DO NOT TRY TO EAT THE SLIME – AND WASH YOUR HANDS  THOROUGHLY AFTER MAKING AND USING IT!

HOW TO MAKE A SLIME

Procedure
At first fill 80 ml cold water into a beaker and put 1g guar flour into it while stirring. Stir it until there are no lumps left and let the flour soak. Then add 10 ml of borax solution (it can be bought in the internet or from the chemist´s), dye and stir it. Wait for a few minutes, until the slime starts to fall off of the wall of its container. Put it in the fridge, it can easily go mouldy!